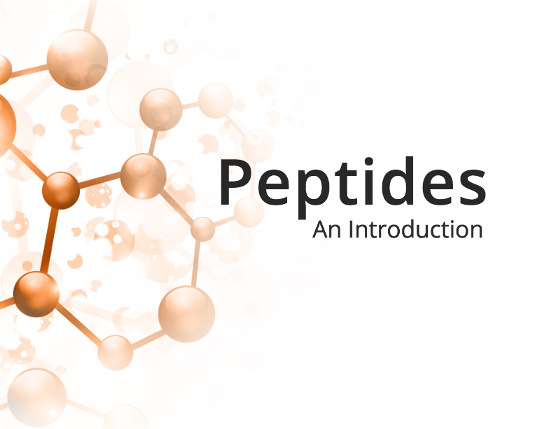 What is a Peptide?

A peptide is a biologically occurring chemical compound containing two or more amino acids connected to one another by peptide bonds. A peptide bond is a covalent bond that is formed between two amino acids when a carboxyl group or C-terminus of one amino acid reacts with the amino group or N-terminus of another amino acid in a condensation reaction (a molecule of water is released during the reaction). The resulting bond is a CO-NH bond and forms a peptide, or amide molecule. Likewise, peptide bonds are amide bonds.
(More information about peptide bonds.)

The word “peptide” itself comes from πέσσειν, the Greek word meaning “to digest.” Peptides are an essential part of nature and biochemistry, and thousands of peptides occur naturally in the human body and in animals. In addition, new peptides are being discovered and synthesized regularly in the laboratory as well. Indeed, this discovery and innovation in the study of peptides holds great promise for the future in the fields of health and pharmaceutical development.

How Are Peptides Formed?

The first synthetic peptide was discovered in 1901 by Emil Fischer in collaboration with Ernest Fourneau. Oxytocin, the first polypeptide, was synthesized in 1953 by Vincent du Vigneaud.

While the number of amino acids contained is a main determinate when it comes to differentiating between peptides and proteins, exceptions are sometimes made. For example, certain longer peptides have been considered proteins (like amyloid beta), and certain smaller proteins are referred to as peptides in some cases (such as insulin). For more information about the similarities and differences among peptides and proteins, read our Peptides Vs. Proteins page.

Milk peptides in organisms are formed from milk proteins. They can be produced by enzymatic breakdown by digestive enzymes or by the proteinases formed by lactobacilli during the fermentation of milk. Additionally, peptones are peptides derived from animal milk or meat that have been digested by proteolytic digestion. Peptones are often used in the laboratory as nutrients for growing fungi and bacteria.

Peptide fragments, moreover, are most commonly found as the products of enzymatic degradation performed in the laboratory on a controlled sample. However, peptide fragments can also occur naturally as a result of degradation by natural effects.

There are some basic peptide-related terms that are key to a general understanding of peptides, peptide synthesis, and the use of peptides for research and experimentation:

Amino Acids – Peptides are composed of amino acids. An amino acid is any molecule that contains both amine and carboxyl functional groups. Alpha-amino acids are the building blocks from which peptides are constructed.

Cyclic Peptides – A cyclic peptide is a peptide in which the amino acid sequence forms a ring structure instead of a straight chain. Examples of cyclic peptides include melanotan-2 and PT-141 (Bremelanotide).

Peptide Sequence – The peptide sequence is simply the order in which amino acid residues are connected by peptide bonds in the peptide.

Peptide Bond – A peptide bond is a covalent bond that is formed between two amino acids when a carboxyl group of one amino acid reacts with the amino group of another amino acid. This reaction is a condensation reaction (a molecule of water is released during the reaction).

Peptide Mapping – Peptide mapping is a process that can be used to validate or discover the amino acid sequence of specific peptides or proteins. Peptide mapping methods can accomplish this by breaking up the peptide or protein with enzymes and examining the resulting pattern of their amino acid or nucleotide base sequences.

Peptide Mimetics – A peptide mimetic is a molecule that biologically mimics active ligands of hormones, cytokines, enzyme substrates, viruses or other bio-molecules. Peptide mimetics can be natural peptides, a synthetically modified peptide, or any other molecule that performs the aforementioned function.