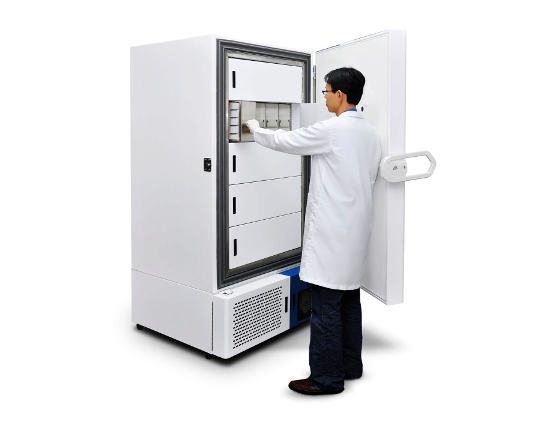 To preserve the integrity of laboratory results, proper storage of peptides is essential. Correct storage practices can maintain peptides for years and guard against contamination, oxidation, and degradation that may render your peptides, and therefore experiments, useless. While some peptides are more susceptible to degradation than others, knowing and implementing the best practices for peptide storage can greatly lengthen their stability and integrity regardless of composition.

Once peptides have been received, it is imperative that they are kept cold and away from light. If the peptides will be used immediately, or in the next several days, short-term refrigeration under 4C (39F) is generally acceptable. Lyophilized peptides are usually stable at room temperatures for several weeks or more, so if they will be utilized right away, such storage is typically adequate.

However, it is more preferable to store peptides that will be used shortly in a freezer at -20C (-4F). For relatively short-term storage (about 1 week to 2 months), this will generally suffice. When storing peptides for months or even years, freezing at -80C (-112F) is optimal in order to preserve the peptide’s stability.

Additionally, it is important to avoid repeated freeze-thaw cycles. This can increase the peptide’s susceptibility to degradation. Also, frost-free freezers should be avoided to store peptides, as temperatures can fluctuate widely during defrosting cycles.

It is imperative to avoid contaminating peptides with both air and moisture. Moisture contamination is especially prone to occur when using a peptide immediately after withdrawing it from the freezer. To prevent uptake of moisture from the air on the cold surface of the peptide or on the inside of its container, allow the peptide to come to room temperature before opening.

It is also crucially important to minimize a peptide’s exposure to the air. A peptide’s container should therefore be kept closed as much as possible. After the required amount of peptide has been removed, resealing the container under an atmosphere of dry, inert gas (such as nitrogen or argon) will minimize the potential for the remaining peptide to become oxidized. Peptides with sequences C (cysteine), M (methionine), and W (tryptophan) are especially prone to air oxidation.

Because frequent thawing and refreezing as well as exposure to air can greatly reduce a peptide’s long-term stability, many researchers prefer to determine each experiment’s required amount of peptide and then aliquot this amount into separate vials as necessary. This is a highly useful preventative measure against peptide degradation.

To best preserve your peptides, it is recommended to avoid storing them in solution wherever possible. The shelf life of peptide solutions is far less than that of lyophilized peptides, and peptides stored in solution are also vulnerable to bacterial degradation. Peptides containing Cys, Met, Trp, Asp, Gln, and N-terminal Glu in their sequences have especially short shelf lives when in solution.

Nevertheless, if peptides absolutely must be stored in solution, sterile buffers at pH 5-6 should be used, and the peptide solution should be separated into aliquots to avoid repeated freezing and thawing. Peptide solutions are generally stable for up to a week when refrigerated at 4C (39F), but those peptides with inherent instability should be kept frozen when not in use.

While high quality glass vials offer all of the desirable characteristics for a peptide storage container, peptides are sometimes shipped in plastic vials in order to guard against breakage. Still, peptides can always be transferred from a plastic container to a glass container or vice versa, if necessary.

When storing peptides, remember to: